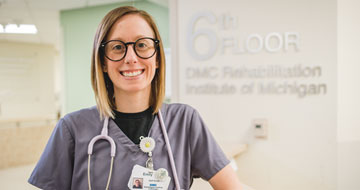 In August 2017, Emily was months away from graduating from nursing school, so she and her fiancé Justin, decided to treat themselves to a long weekend in Traverse City, MI. After spending a day at the beach,  their car was T-boned by a pick-up truck.  Emily and Justin were rushed to the local emergency room with life-threatening injuries.

Emily was diagnosed with a traumatic brain injury (TBI) and placed in a medically induced coma. Emily’s trauma doctor recommended she be transferred to Rehabilitation Institute of Michigan (RIM).

“I woke up during my second week at RIM. I had no recollection of the day of the accident or the three weeks after, and the only people I recognized was my mom and brother” says Emily.

Emily started physical, occupational and speech therapy to relearn how to walk, write and speak.

“It was very childlike in the beginning,” says Emily’s mother Kim. “It was like Emily was five years old. I watched my child grow up all over again.”

Emily was an inpatient at RIM for almost a month and she continued to progress in RIM’s outpatient program for several months after that.

Less than a year after the accident, Emily is reclaiming the life she nearly lost. She graduated from nursing school and she and Justin were finally married. After Emily graduated from nursing school, she wanted to work as a rehabilitation nurse, specifically with brain injury patients. In August 2018, Emily was hired as a nurse on RIM’s Neuroscience Unit, the same unit where she was once a patient. Today, she is a source of hope and inspiration to the patients she cares for.

"This place changed my life in a great way. They helped me reclaim the life that I did have and I wouldn't be here today without the medical team and all the people who are here at the Rehabilitation Institute of Michigan.”.

RIM treats more than 250 brain injury inpatients a year. Our high inpatient volume and diverse patient population mean our team of experts is experienced in treating all types of brain injuries, including the most complex cases.  RIM also houses the Southeastern Michigan Traumatic Brain Injury System (SEMBTIS), which conducts ground breaking brain injury research that is vital to future advances in the treatment and recovery of persons with brain injuries.