Tyler Lynch was enjoying life working as a certified public accountant (CPA), living with friends in Royal Oak, playing golf and other sports. 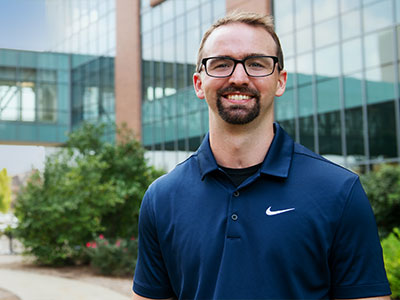 September 2018, he was vacationing up north. While walking from a friend’s cabin to a campsite, he was hit by a drunk driver.

“I don’t remember the accident. I know two friends gave me CPR until the ambulance arrived. I had a traumatic brain injury (TBI), broken left femur, broken right tibia and fibula, every rib was broken or fractured, a ruptured spleen, collapsed lung and a torn aorta valve.”

Tyler went to a Sault Ste. Marie hospital and was quickly flown to Grand Rapids. Two weeks later, he was taken to a hospital near Detroit where he stayed for three months. He had multiple surgeries during his hospitalization. When he was released, he was referred to an outpatient rehab at the DMC Rehabilitation Institute of Michigan’s (RIM) Novi Center.

Tyler did outpatient physical, occupational and speech therapy several times a week at RIM Novi. He says it was amazing. They came up with exercises he could relate to.

“They knew numbers were my thing. So, they had me doing math problems to jog my memory. They knew running was important to me, so, as they helped me walk again, running was a focus. And, for the recreational therapy, we did the sports I love like bowling and swimming.”

By July of 2020, Tyler was fully independent, driving, working and living unassisted.

“I am lucky to be alive, proud of all I’ve gotten back and RIM was such a big part of that. My family and I can’t thank them enough."