“I woke up in an emergency room. I couldn’t move anything from my shoulders down.”- Mike Sackey


“I was body surfing Easter Sunday 2021 in Melbourne Beach, Florida.  The waves were rough. I was the only one out there.  The next thing I remember is people frantically calling my name in the emergency room.  I couldn’t move anything from my shoulders down.”

A wave had slammed Mike Sackey to the ocean floor and he didn’t surface. His friends ran in for him.  A passerby performed CPR, bringing him back to life.  Taken to a hospital, doctors used a plate and cadaver bones to fix his incomplete spinal cord injury, and they inserted a pacemaker to repair heart issues from the drowning. 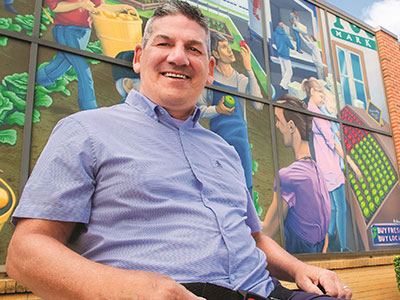 “I spent six weeks in the hospital.  During the first week, I moved my fingers and toes.  I knew there was hope.”

When Mike was stable enough to be airlifted home, he was taken to the DMC Rehabilitation Institute of Michigan’s (RIM) inpatient Spinal Cord Injury Unit. He did daily physical and occupational therapies and speech therapy to help with the concussion from the accident.

“I’m an artist and play drums in a band.  My therapy even included drawing and drumming. What was cool is I worked with University of Detroit Mercy engineering students and their ‘Faces on Design’ program to design an adaptive easel, making it easier for me to paint.”

When Mike left RIM, he was using a walker with his left arm while strengthening his dominant right arm.  He continued with outpatient therapy and says he’s so grateful for his RIM therapists.  He felt they were up on everything.  Using a walker, he continues with his therapy at home.

“I recently participated in an art competition, hope to do some future shows to sell my work and start in the band again.  None of this would be possible without RIM and the unique collaborations they have.”