“I attempted training for a marathon several times, but I’d get injured.” – Jim Ferency


Jim Ferency has run and raced most of his life. After taking a break in 1984, he started up again in 2016, racing 60 times over five years — from the mile to half marathon.

“Running a second Boston Marathon was on my wish list, but that means running two marathons: a Boston qualifying marathon and then Boston. I attempted training for a marathon several times, but I’d get injured.” 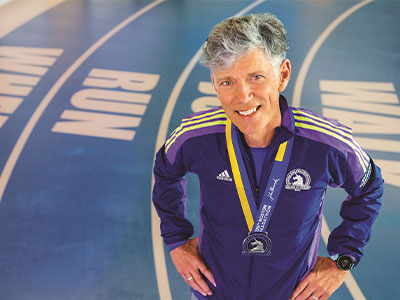 From December to April, 2021, Jim was finally able to train for and finish the Toledo Marathon, almost 40 minutes under the Boston qualifying standard of 4:20. But recovery from the Toledo Marathon was slow, and even worse, he developed plantar fasciitis.
Jim began rehab in Midland, then switched to the DMC Rehabilitation Institute of Michigan (RIM) after moving to Windsor, Canada.

“I was a running fanatic from 2016 to 2021. With the Toledo Marathon, it all proved to be too much. I ran Boston in 1982 when I was 30. I’d be 70 for the next one, but I wanted to run well in my age group. I worked with my therapist twice a week, stretching and weight training. They seemed to want me in Boston as much as I did.”

Jim was improving but relapsed with a month to go, forcing him to stop. His therapist recommended he substitute bicycling for running, run Boston and accept finishing as the goal.

At the start of the Boston Marathon, Jim reluctantly made finishing his goal, but says he felt strong and went for a sub-four-hour pace.  He finished in 3:57.

“To get a time like that on a tough course and no running a month prior really surprised me. I placed 25th out of 195 men in my age group.  I’m grateful for all the support I received from RIM, my family, friends and coach.”