“I’m 91 years old.  I’m still active, and I owe it to the wonderful therapists
at RIM”- Jaunita Lemons

At 83 years old, there wasn’t much slowing Juanita Lemons down.  She was a bowler, played keno, attended church regularly and if anyone asked her to do anything, she was up for it.  But in 2012, she started to develop numbness in her left foot.

“My doctor said I had poor circulation and a blood clot.  I was surprised because I was so active.  He put me on medication to improve my circulation.” 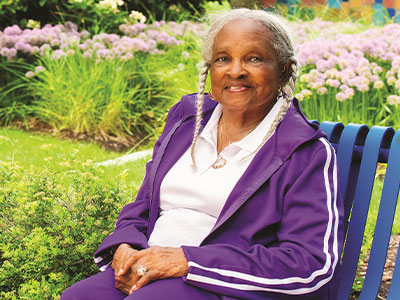 Over the next year, Jaunita’s foot got worse.  She was walking, but the pain was so bad, that she could barely touch it.  Eventually, she was admitted to the DMC Harper University Hospital.

“The doctor told me my only chance for relief was to amputate my leg below my knee.  I had to accept it and make the best of it.”

Jaunita spent a month at Harper, where she worked with acute care rehab therapists from
DMC Rehabilitation Institute of Michigan (RIM). While in a wheelchair, therapists worked to teach her how to balance and move with one leg.

“Everyone was so encouraging.  I attended an RIM class for amputees.  I met a woman with no arms or legs and was using all prosthetics, and she was happy.  I knew I could be too.”

Once released, Jaunita continued with outpatient physical therapy at RIM.  In 2014, she got a prosthetic leg and foot and continued rehab.  She quickly moved from a walker to a cane and now doesn’t use any assistive device.

“I’m 91 years old.  I’m so proud of my progress and what I can do.  I’m still active, and I owe it to the wonderful therapists at RIM.  I tell them all the time to just turn my age numbers around to 19, because they’ve made me as good as a recycled teenager.”