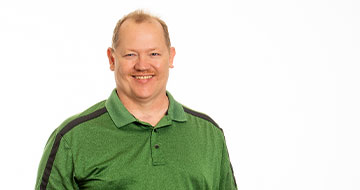 While stationed in Afghanistan as an airplane mechanic in 2019, a fellow soldier noticed Bill Scalf’s flashlight shining erratically inside a plane and came to check things out. Bill was having a stroke and was quickly taken to a Kandahar hospital and airlifted to a German military hospital. While at the hospital, he had a second stroke and was transferred to Homburg.

“By the time I got to Germany, Bill was in a medically induced coma after having a blood clot removed from his brain,” said his wife, Cherie. “We stayed in Germany for a month until he could fly back to Walter Reed Hospital in the U.S.”

When it came time for outpatient rehab, Bill’s family spent countless days looking for the best place and was directed to the DMC’s Rehabilitation Institute of Michigan (RIM). Bill’s daughter took a tour of RIM and said there was no better place for him.

“When I first got there, I was in a wheelchair and I couldn’t write my name,” said Bill. “I had nausea, double vision and had trouble speaking. I just wanted to be myself again and go back to work.”

Being in a career known for tough men and women, Bill said his physical, occupational and speech therapists were some of the toughest people he’s ever known. They were positive and never quit on him.

“I’ve never seen such great teamwork,” said Bill.  “They all sat down together to discuss what was best for my recovery. Not just once, but all the time. If one noticed something during therapy, they would share it with the team and come up with the best approach for my needs. It was just a great example of collaboration.”

After outpatient therapy three days a week and continuing to work out at home on his off days, Bill is now running and able to do three sets of 55 pushups.

“I am so happy with how I’ve recovered,” said Bill.“ It’s because of my team and how they constantly tried new things. I couldn’t have asked for anything more. One of my future goals is to work with other stroke victims and tell them to stay tough.”