Skip to main content and our Accessibility Statement may be found in the footer of our website.
Back To Stroke Stories
{{CTAButtonText}} 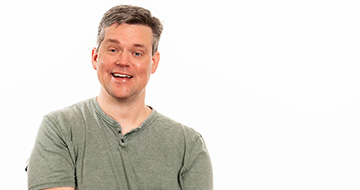 Dr. Todd Aho, a neuroradiologist at Henry Ford Hospital, delivered life-changing news every day to his stroke patients. He never imagined that he’d become a stroke patient himself.

On Thanksgiving in 2018, he went to bed thankful for his family and career and woke up having trouble walking, talking and experienced a drooping face. His wife, Amy, knew the signs of a stroke and immediately got help.

At the hospital, a carotid artery clot was removed, however the swelling in his brain was severe so a second surgery was done to relieve the pressure.

“As a doctor, you never think about what your patients go through,” said Dr. Aho. “I get it now! I was bad. I couldn’t move my left arm or leg, and I was on a feeding tube.”

Dr. Aho’s family refused to let him be released from the hospital until there was a bed available at DMC’s Rehabilitation Institute of Michigan (RIM). His wife knew it was the best.

He continued doing outpatient therapy at RIM’s main campus two times a week and followed a home exercise program designed by his rehab team. Seven months after his stroke, he began to move his left leg.

“It was months before I first stood up, but my therapists refused to give up on me,” said Dr. Aho. “They are experts and did so many different things with me like using the Ekso (robotic exoskeleton), which eventually helped me walk again.”

Today, Dr. Aho is working toward walking without assistance and driving again. His speech and cognitive ability are great.

“They’re the best! Other facilities don’t have the knowledge or care to get you back to being your old self like RIM,” said Dr. Aho.