Skip to main content and our Accessibility Statement may be found in the footer of our website.
Back To Spinal Cord Injury Success Stories
{{CTAButtonText}} 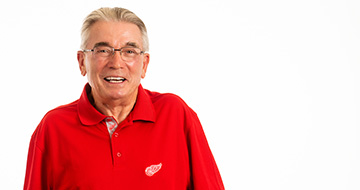 Retired firefighter, Ed Mainguy, was headed home to Avoca, Michigan, when he swerved to miss a deer. His car hit ice and rolled into a ditch, breaking his neck.

Ed was taken to a Port Huron hospital, where hardware was put in to stabilize his neck and upper back. Doctors weren’t sure if he would walk or use his arms again. Weeks later, doctors realized the rods weren’t working and sent him to another hospital to have them replaced.

After recovering from his surgeries, Ed was eventually transferred to the DMC’s Rehabilitation Institute of Michigan’s (RIM) inpatient spinal cord injury unit. He couldn’t sit up or feed himself. While lying in bed, he hoped one day he would recover.

“When I got to RIM, I told them I wanted to dress myself, take care of my bodily functions and walk without assistance, but I wasn’t sure I’d ever get there,” said Ed.

Occupational and physical therapists got Ed out of bed every day for treatment. He had to completely relearn the skills he lost. When he left RIM six weeks later, he was walking short distances with a walker.

“I couldn’t believe it. They all praised me with how far I had come, but I praise them,” said Ed. “They all had their own niche and exercises they wanted me to do. I never did the same thing twice in a day.

Ed says the therapists really cared about him, and if he wanted anything, they made happen. One therapist even set him up with a voice-activated phone.

While in outpatient therapy, he was able to walk the distance of a marathon. Today, he still has 24/7 care and walks with assistance, but he’s moving forward.

“I get teary-eyed thinking about the therapists,” said Ed. “They’re all excellent. They listen and understand your goal and work like a fine-tuned machine to get you there.”