“I kept thinking, this could be my last moment of glory.” 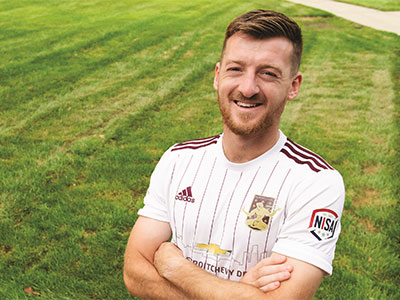 “It was so exciting. I was even named the MVP. But, I played with a hurt knee and was scheduled for surgery. I kept thinking this could be my last moment of glory.”

Steve had hurt his knee in a practice months earlier. He had extreme pain when he moved his leg side to side and his knee felt loose. Because of COVID-19, he didn’t get it looked at until months later.

“An MRI found a torn meniscus. My muscles and ligaments protected the injury, making it possible to play, but I was only at 70%.”

“The surgery was easy; it was the mental that was tough. I wasn’t sure if I’d ever play again or that my knee would be at 100%. This was my second knee surgery after tearing my ACL in college.”

When Steve got to rehab, he’d lost a lot of muscle. Two days a week, he worked with a physical therapist on things like squats and jumps to build his strength. His therapist also worked on building his confidence. She helped prepare him for when he would play again.

When the new season started, it took him a few weeks to feel comfortable, but he ended up scoring in the semi-finals of the team’s first tournament.

“RIM is like a top sports rehab facility. The therapists and equipment are some of the best I’ve seen. It’s because of them that I’m back in my defender’s position and playing at the top of my game.”