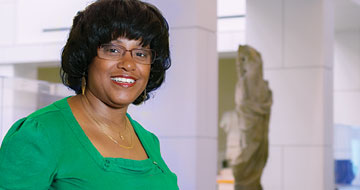 “It was a horrific accident,” says Stephanie White, “two of us were sent flying in the air, I landed so deep under brush, rescuers couldn’t find me at first.”

Stephanie went out for a bike ride with 11 friends on June 29, 2016.  Waiting at a stop sign for traffic to clear, a car clipped another car, hurtling it right into the bikers.  Stephanie, a friend and their mangled bikes were tossed into a nearby yard.

In a coma with brain injuries and a broken femur, Stephanie was rushed to Sinai-Grace Hospital. Days after her vital signs stabilized, doctors repaired her broken leg with a titanium rod.

“I spent two months there before I was awake and well enough to transfer to the Rehabilitation Institute of Michigan (RIM). And, even then, I went over on a stretcher.”

Stephanie says her main goal was to get back to being Stephanie. She was scared that she’d lost the ability to be independent and ride her bike again.  At RIM for a month, she did physical, occupational and speech therapy every day.

“My therapists said not riding a bike again, wasn’t an option. They did everything in their power to make sure I was up, moving and riding again. Whenever I had doubt, they were quick to say ‘you’ll get it.’”

Stephanie left RIM in a wheelchair and continued with outpatient therapy. She advanced to a walker and eventually a cane, which she now uses only once in a while.

“I have been back on a bike!  Just last week, I did 23 miles and it felt great. Not knowing if I could even do one mile a few months back and now to feel the wind in my face. RIM has given me my freedom back.”