“I’m back doing just about everything, including Zumba.” – Shirley Conerly


Shirley Conerly jumped into the shower, but as she was stepping out, she couldn’t feel the floor and felt wobbly.  She was worried she might fall, so she crawled into her bedroom and laid on the floor.

“My phone was on the steps, which I didn’t want to go near for fear of falling.  I heard it ringing and ringing. I knew it was my daughter and hoped she’d come over to see why I wasn’t answering.  She got there in the nick of time!” 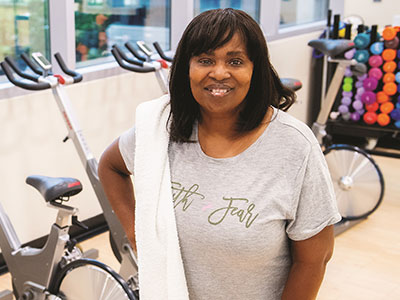 Shirley was having a stroke.  Doctors at a nearby hospital treated a bleed in her brain. Two weeks later, she was discharged to DMC Rehabilitation Institute of Michigan’s (RIM) inpatient Neuroscience Unit.

“I was paralyzed on my left side and had trouble speaking.  All I did when I first got to RIM was cry all the time.”

Shirley says every day, her physical, occupational and speech therapists told her she could do it and to stay positive and strong.  She felt so good that everyone at RIM knew her name, even if they weren’t working with her.  They would give her a “hello,” a smile and encouraging words.  By the time she left a month later, her speech and memory had greatly improved. She could do daily activities with her left hand and was using a cane for short distances.

Shirley continued with outpatient therapy at RIM.  During her second week, her therapists said they didn’t want to see her using her wheelchair anymore. Three months later, Shirley walked out of rehab unassisted, almost 100% back.

“I’m back doing just about everything, including gardening and Zumba.  The best part is I have no trouble getting on the floor to play with my three-year-old grandson.  RIM, it’s all because of you and your incredible love and support!”