“My team Won! That would never have been possible without RIM” – Rickey Holmes


High school football and softball coach Rickey Holmes went for an annual physical. He noticed a flyer on the wall detailing heart failure.  He was having some of those symptoms and told his doctor.

“She immediately had me make an appointment with a heart doctor.  I went in for an EKG and stress test.  They said they’d call me in a week with the results – a day later, they called me.” 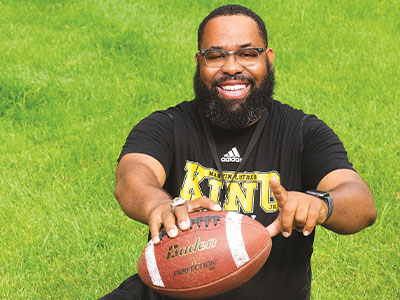 The doctor said Rickey had likely had a heart attack and needed a quadruple bypass.

“My mom had the same thing.  I was scared, and didn’t want to do it, but the doctor said if I didn’t, the outlook wasn’t good. When I looked in my mom’s eye, I knew I had no choice.”

A few days later, he had a successful quadruple bypass surgery at DMC Harper University Hospital.  After being released, he was referred to cardiac rehab at the DMC Rehabilitation Institute of Michigan.

“I wanted to do whatever I could to get back to my 11-year-old son and the kids I coach.   I didn’t know what cardiac rehab was, but I was ready.”

Two days a week for 20 sessions, Rickey worked out on the treadmill with ropes and weights, did wall pushups – anything to build his cardiovascular strength and endurance.

He said it was tough and that the therapists really pushed him, but the rewards were almost immediate. His strength started to return.  He lost weight, ate better and was so encouraged by all the differences.

“I was so impressed by the therapy.  My mom went through the same surgery and couldn’t believe how much quicker I recovered than she did without therapy.  My junior varsity football team went on to win a junior varsity championship for me, and my varsity team won the state championship. That would never have been possible without RIM."