“Even though my legs are gone, I’m blessed.”

Ray Foster was helping his nephew with a screen repair on July 13, 2020. They took the door to a Detroit repair shop, parked along the street, and Ray hopped out. 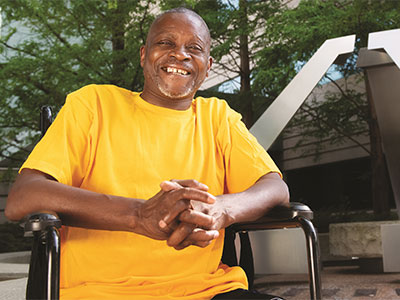 “I opened the tailgate and bam! I fell to the ground, and everything went still. This angel came to me and said, ‘I’m going to take care of you right now, and you take care of the rest.’ Then, it was as if my surroundings came back to life.”

Ray had been hit by a car. His left leg was severed and laying in the street. His right leg was attached but completely mangled. The driver who hit him left the scene. Ray was taken to DMC Sinai-Grace Hospital where doctors removed his right leg below the knee.

“Even though my legs are gone, I’m blessed. From the minute that angel talked to me, I’ve had peace. I have my arms, no pain, and I’ve been put in the path of all the right people. There’s no question, I will walk again.”

Once Ray was stable, he moved to the rehab unit at Sinai-Grace, managed by the DMC Rehabilitation Institute of Michigan (RIM). He had physical and occupational therapies to strengthen his arms and the remaining portions of his legs. Therapists also worked with him on transfers and wheelchair use. Once released, he has continued with outpatient therapy at RIM’s Northwest Detroit Center.

“My therapists are the most incredible people next to my mom. There isn’t a day they haven’t had me moving. I now go to RIM two times a week, and when I get my prosthetics, it’s not if I’ll walk again, it’s when. My angel put RIM in my life, and I’m not going to let either of them down.

Ray’s work ethic and positive attitude has inspired others.

“Other RIM patients tell me I’m amazing and that if I can do it, so can they.”