“We were told it was an aneurysm, and she was brain dead.”

In September 2020, 14-year-old Mionna Johnson and her mom, Tiffany, were at home dancing when Mionna collapsed. She said it felt like her brain had exploded. She started vomiting and lost consciousness. 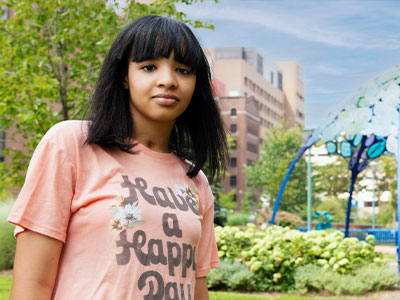 “I thought COVID, but my husband, Bryce, recognized her symptoms as an aneurysm. We called 911, and at the hospital, we were told it was an aneurysm and she was brain dead,” says Tiffany.

“She had surgery that night to relieve pressure on her brain. Her dad and I prayed and spent the next four months waiting for her to recover. We saw no hope until a month after her collapse, Mionna opened her eyes. We all started crying,” says Tiffany.

Mionna was transferred to the rehab unit at Children’s Hospital of Michigan, managed by DMC Rehabilitation Institute of Michigan (RIM). Therapists worked on restoring her cognitive ability, speech and developing the movement they saw her in legs.

“I spent 117 days in the hospital, I’m definitely a miracle! I did six hours of rehab a day and when I left, I could stand for short periods, I could talk and cognitively. I was getting better,” says Mionna.

Mionna has continued with outpatient therapy at RIM’s Novi Center. She’s improved so much that she’s returning to Grosse Pointe North High School.

“I’m still working on walking and talking better and I’m relearning how to draw. I was a great artist, so I’m excited for the day when I can draw again,” says Mionna.

Mionna thanks God for putting RIM in her life.

“If you just believe in your faith and God, everything will work out. Have determination and never give up,” says Mionna.