“My therapists refused to let this accident define me, and so have I.” – Karla Willis


Karla Willis, the co-owner of Detroit Mini Donuts, was headed to work on December 7, 2021.  Exiting the expressway, a car veered into her lane. She honked, and the car went back to his lane.

“Minutes later, I parked on the street and heard someone beep.  It was the car that had come into my lane!  The driver was hanging out the window. He backed up to get in front of me, gave me a smirk and barreled into me.” 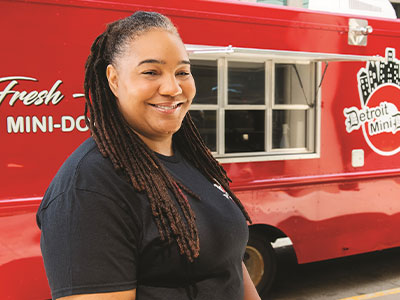 Karla was knocked to the ground with such force she went rolling.  The only thing that stopped her was her head hitting a tree.  Taken to DMC Detroit Receiving Hospital, doctors operated on shattered bones in her legs, along with torn tendons. She also had damaged her left hand and surface head wounds.  Nine days later, she was transferred to DMC Rehabilitation Institute of Michigan (RIM).

“I wasn’t expecting all the amazing physical and occupational therapy.  When I left three weeks later, I could transfer from my wheelchair, dress myself and reach things with an assistive device. I was totally prepared to go home.”

Karla’s broken bones healed, and thanks to RIM outpatient therapy, she relearned to walk. She’s now walking with minimal assistance and back working the window, greeting customers and taking orders on her donut food truck.

“My therapists are so perceptive – we’ll work on one thing and then they may see something they don’t like, and we work on that. I still have issues like shin splints and back pain that make it tough to stand for too long, but honestly, my quality of life wouldn’t be the same without RIM.  They’ve also helped me heal mentally.  They’ve refused to let this accident define me, and so have I!”