“I was diagnosed with lymphedema, and there’s no cure. RIM gave me hope.”

Despite a closet full of shoes, Jason Watkins could only wear two pairs. His feet and legs would swell so badly every day that squeezing into a favorite pair and even some jeans was impossible.

“I was diagnosed with lymphedema and there’s no cure. It wasn’t a matter of putting the shoes and pants on and letting them stretch for a few minutes. There was no way I could even get them on, and the thought that this was only going to get worse was really depressing me.” 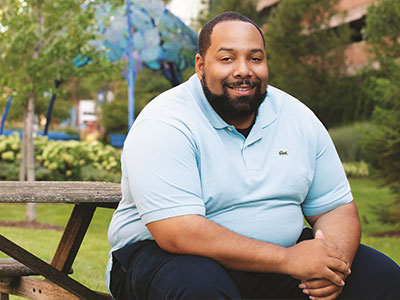 Lymphedema happens when a person’s lymphatic system doesn’t drain properly causing excess fluid in the tissue. It causes swelling which often gets better when you’re off your feet or after a night’s sleep, but throughout the day the swelling returns. Jason says looking back, this had been happening for years.

“I went to a vascular doctor who recommended the DMC Rehabilitation Institute of Michigan (RIM) and was totally surprised. They said with hard work, we’d get my swelling down. I had no idea I had any options. They gave me hope.”

Three times a week for two months, Jason went to outpatient therapy at RIM, where he worked with specialty-trained, certified lymphedema therapists. He wore “moon boots” with a compression pump to help improve his circulation, and therapists had him doing exercises like leg presses and lunges. They also taught him and his wife how to wrap his legs and feet to keep up the compression between visits. When his rehab finished, he had continued with the compression and exercises at home.

“It’s because of RIM that I was able to put on shoes other than the two pairs I alternated between. I was like… ‘Wow, I’m trying the jeans too!’ And now today, I’m back wearing some of my favorite Air Jordans and feeling great! Thank you RIM for getting me and my style back.”