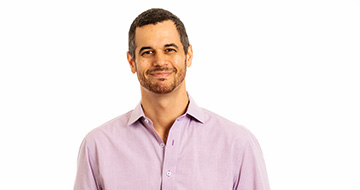 While attending a Tough Mudder race in Pennsylvania, Ian was about to face his biggest challenge yet.

“We were running this race at night so during the day, my teammates and I walked the course so we’d know what to expect,” said Ian. “We headed back to our Airbnb to rest and that’s the last thing I remember.”

The car Ian was riding in was t-boned by another car going 86-mph in a 35-mph zone. Ian sustained a serious brain injury. Spending a week in a coma, doctors said he would need 24-hour care for the rest of his life. When he was stable, he was flown to the DMC’s Rehabilitation Institute of Michigan’s (RIM) inpatient neuroscience unit.

“I was out of it the first two months at RIM,” said Ian “I couldn’t communicate or move. I did daily physical, occupational and speech therapy for strengthening, walking and cognition. When I left, I was walking, talking and able to care for myself. I had already far exceeded what the original doctors told my family.”

Ian said RIM’s therapists are really creative. His therapist, Melissa, felt the best way to motivate him was to speak his language. He was used to training for obstacle courses so she would set up obstacle courses in the therapy gym.

“When I would get into it, I felt like I was training for a Tough Mudder, not doing therapy,” said Ian. “It was great.”

Ian continued outpatient therapy at RIM to further work on his balance and overall strength. He lives alone, has gone back to work and now plays poker instead of running races.

“I’m different today, but RIM has helped me get to the best Ian I know. The therapists got me through some pretty rough days, but I’m here and ready to make the most of every new day,” said Ian.

RIM houses the Southeastern Michigan Traumatic Brain Injury System (SEMTBIS), one of only 16 centers of excellence in the country for the care and research of those with traumatic brain injury (TBI). SEMTBIS conducts ground-breaking brain injury research that is vital to future advances in the treatment and recovery of those with brain injuries.