“I felt like my upper and lower body were disconnected.  I couldn’t move anything.”- Eddie Fakhoury


It was the middle of the afternoon in January 2022, and Eddie Fakhoury was working from home.  Coming downstairs, he fell four steps from the bottom, landing on his back.

“I felt like my upper and lower body were disconnected.  I couldn’t move anything.  No one was home.  I just tried to stay calm.  Fortunately, I had on an Apple Watch and called 911.” 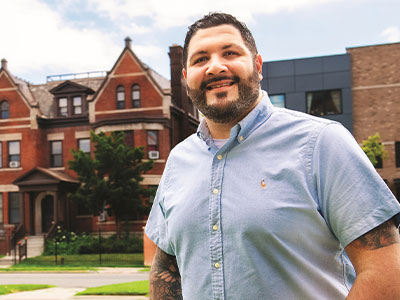 Eddie was taken to a nearby hospital and was diagnosed with an incomplete spinal cord injury. He had surgery to place two rods and six screws on the vertebrae to protect the spinal cord from further injury. Two weeks later, he was transferred to DMC Rehabilitation Institute of Michigan’s (RIM) Spinal Cord Injury Unit.

“I played sports all through school.  Shortly after my surgery, I could move my big toe on my right foot.  That was all I needed to get into grind mode – I couldn’t wait to get to RIM because I just needed hope, and I would run with it.”

During his inpatient stay, Eddie says physical and occupational therapists definitely pushed him.  He did too.  If they asked him to do 10 reps, he did 20.  He took advantage of every opportunity, even therapy on the weekend.

“Within weeks, I went from not being able to move to standing in a walker shooting bean bags into a hoop. We even did Wii bowling, which we call Wiihab!”

Eddie has continued with outpatient therapy at RIM Novi Center, where he even does aquatic rehab in their therapeutic pool. He has transitioned to using only a cane and is working toward driving, going up and down the steps and being as independent as possible.

“RIM has been the best experience for me. Five months ago, I was flat on my back, but we all went into ‘athlete training mode.’  They gave me the best support possible – mentally and physically, and I’m so grateful for where I’m at today and more that’s yet to come!”