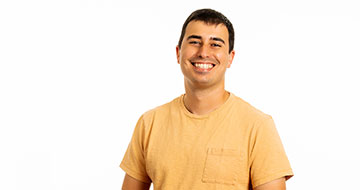 Detroit Horse Power provides opportunities for high-risk youth in Detroit by teaching them to care for and ride horses. And when its founder, David Silver, was in a car accident, he needed as much horsepower as he could to muscle through his rehabilitation for a skull fracture, broken neck and a traumatic brain injury.

On Christmas Eve in 2018, David was driving from Kentucky to South Carolina when a vehicle crossed the median and slammed head-on into his car. He was airlifted to a West Virginia hospital, where doctors removed bone fragments from his head and fused his neck.

“For several days, I was unconscious,” said David. “When I woke up, I couldn’t move my left hand and experienced cognitive effects from the trauma and pain medication. When I left two and a half weeks later, I was walking but not well.”

“The therapy was outstanding,” said David. “They worked to get me moving again and gave me strategies to deal with the new challenges I faced. I was happy with the progress I had made when I was released two weeks later.”

David continued with outpatient therapy at RIM three times a week, focusing mainly on improving his hand movement. He has now returned to working with kids and horses.

“The people at RIM are so caring. They were there for me at a critical time,” said David. “Everyone works hard to keep you on a schedule, busy and progressing in your recovery. I was able to return home safely and continue working to regain as much function as I can. I am so thankful for all the hardworking professionals there. I hope other people benefit from RIM as much as I have.”