“My two daughters were in a car accident. I was shocked.”

When Francis Yancy got that call in the middle of the night, she knew it wasn’t good. 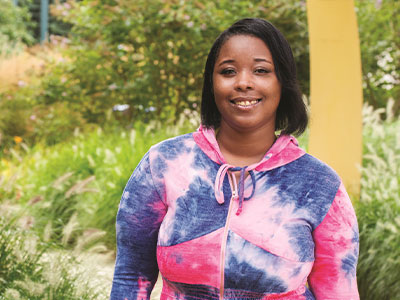 “It was the hospital. My two daughters were in a car accident. Twenty-year-old Alexis was already in surgery, and 18-year old Desiree was getting prepped. I was shocked,” says Francis.

“Doctors fixed Desiree’s hip that night. Alexis had a week’s worth of surgeries. She was in the ICU and in a coma for three weeks. I didn’t want Desiree to know how bad Alexis was, so she could focus on her recovery,” says Francis.

When Alexis was stable enough, she was transferred to the DMC Rehabilitation Institute of Michigan (RIM). By that time, Desiree was also at RIM, relearning how to walk. For Alexis, therapists worked on regaining movement in her legs and arms. They helped strengthen her core, get her facial muscles moving again and worked with her on her memory and speech.

“Having the two girls there at the same time was good. They were separate but would FaceTime each other,” says Francis.

“RIM is great. Everyone stops and talks to me and makes sure I’m having a good day. And they push me. When they ask me to try something new, they’ll motivate me with a cupcake. Keep those cupcakes coming,” says Alexis Poindexter.

Alexis says her goal is to walk again and has recently rescued a dog to help keep her moving. She can’t wait to catch up with her sister who’s walking with a crutch.